On 30 June 2020, Jialin Hou, Ph.D. student of ICDLI,  published the latest paper titled "Microbial succession during the transition from active to inactive stages of deep-sea hydrothermal vent sulfide chimneys" in Microbiome, a world-famous journal in microbiology. The correspondence authors are Fengping Wang and Xiang Xiao. The paper was co-authored by Dr. Stefan Sievert from Woods Hole Oceanographic Institution (WHOI) in the United States.

Deep-sea hydrothermal vents are highly productive biodiversity hotspots in the deep ocean supported by chemosynthetic microorganisms. Prominent features of these systems are sulfide chimneys emanating high-temperature hydrothermal fluids. While several studies have investigated the microbial diversity in both active and inactive sulfide chimneys that have been extinct for up to thousands of years, little is known about chimneys that have ceased activity more recently, as well as the microbial succession occurring during the transition from active to inactive chimneys. 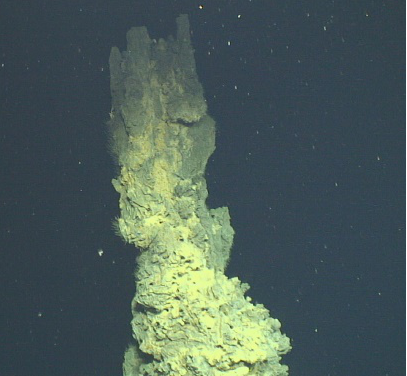 Genome-resolved metagenomics was applied to an active and a recently extinct (~ 7 years) sulfide chimney from the 9–10° N hydrothermal vent field on the East Pacific Rise. Full-length 16S rRNA gene and a total of 173 high-quality metagenome assembled genomes (MAGs) were retrieved for comparative analysis. In the active chimney (L-vent), sulfide- and/or hydrogen-oxidizing Campylobacteria and Aquificae with the potential for denitrification were identified as the dominant community members and primary producers, fixing carbon through the reductive tricarboxylic acid (rTCA) cycle. In contrast, the microbiome of the recently extinct chimney (M-vent) was largely composed of heterotrophs from various bacterial phyla, including Delta-/Beta-/Alphaproteobacteria and Bacteroidetes. Gammaproteobacteria were identified as the main primary producers, using the oxidation of metal sulfides and/or iron oxidation coupled to nitrate reduction to fix carbon through the Calvin-Benson-Bassham (CBB) cycle. Further analysis revealed a phylogenetically distinct Nitrospirae cluster that has the potential to oxidize sulfide metal minerals coupled to oxygen and/or nitrite reduction, as well as for sulfate reduction, and that might serve as an indicator for the early stages of chimneys after venting has ceased. 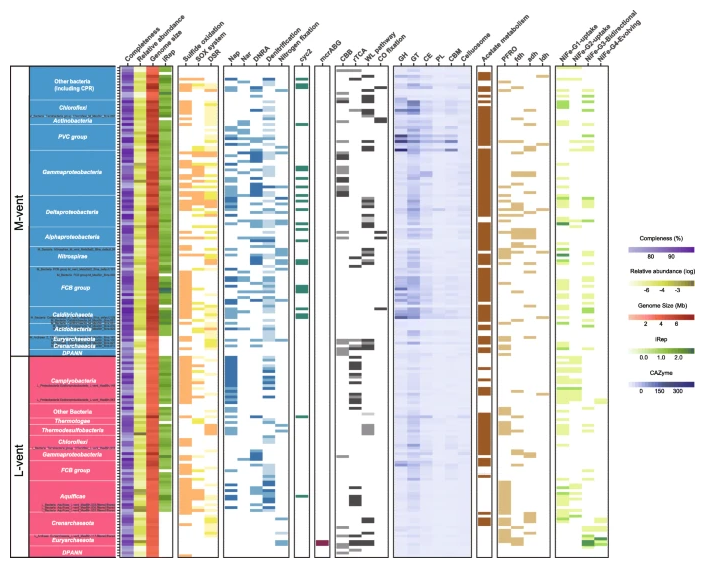 This study sheds light on the composition, metabolic functions, and succession of microbial communities inhabiting deep-sea hydrothermal vent sulfide chimneys. Collectively, microbial succession during the life span of a chimney could be described to proceed from a “fluid-shaped” microbial community in newly formed and actively venting chimneys supported by the oxidation of reductants in the hydrothermal fluid to a “mineralshaped” community supported by the oxidation of minerals after hydrothermal activity has ceased. Remarkably, the transition appears to occur within the first few years, after which the communities stay stable for thousands of years.