Cold seeps are areas, where hydrocarbon-rich fluid seeps up from below the ocean floor at fluid-flow velocities of centimeters to meters per year, often as hydrogen sulfide and methane. They are common along continental margins worldwide and can be thought of as hot spots of a certain habitat type, providing niches that are strongly different from the surrounding seafloor. Cold seeps are also known as the deep-sea oasis. The chemosynthetic microorganisms inhabiting cold seeps convert the methane into organic matter and carbon dioxide to generate energy that supports the life of microbes, mussels and other organisms. Anaerobic oxidation of methane (AOM) coupled to sulfate reduction (SR) is the primary energetic process in cold seeps and is catalyzed by a consortium of anaerobic methanotrophic archaea (ANME) and sulfate-reducing bacteria (SRB) of the Deltaproteobacteria. The overall AOM-SR reaction CH4 + SO42- → HS−+ HCO3− +H2O generates a Gibbs free energy of only −20 to −40 kJ/mol of methane oxidized, which is shared between ANME and SRB. Therefore, AOM is considered as one of the least exergonic processes supporting life. Moreover, the AOM process is also a major sink of the oceanic methane budget, consuming up to 300 Tg methane per year, equivalent to ~88% of the methane released from subsurface reservoirs. Hence, the AOM process attenuates the emission of the greenhouse gas methane and supports a large, diverse microbial, and animal population.

In response to this scientific problem, Yu Zhang's team, from ICDLI (The International Center for Deep Life Investigation), Shanghai Jiao Tong University, published an article entitled "Genomic and enzymatic evidence of acetogenesis by anaerobic methanotrophic archaea" in Nature Communications. In this work, a complete archaeal acetogenesis pathway was identified in the ANME-2a genome. Also the genomic and enzymatic evidence of this pathway was analyzed.

A microbial community fueled solely by the AOM process

An AOM-enriched community, which originated from a mud volcano in Gulf of Cadiz, was incubated in a simulated cold seep ecosystem where methane and sulfate were supplied as the only energy source within the ecosystem for 8 years prior to this research. The incubation was performed in a continuous high pressure reactor with independent control of the methane partial pressure and incubation pressure. During the 8-month experiment, the chemical composition in the incubation system was measured every two days to track AOM activity. Approximately 1.39–2.56 μM acetate was detected in the slurry. The microbial conversion of methane into acetate was further confirmed by isotope-labeling experiments. It is speculated that ANME is a key microorganism in the conversion of methane into acetate.

Genomic evidence of methane to acetate conversion by ANME-2a

To verify whether ANME-2a has the metabolic potential to convert methane into acetate and to identify the key genes involved, a metagenomic approach was applied. The results suggested that not only all the genes involved in the classic AOM pathway from methane to carbon dioxide exist in the genome of ANME-2a, but also a complete metabolic pathway for the conversion of methane to acetate (Fig. 1). Moreover, the genes acs and acd, which encode AMP-forming acetyl-CoA synthetase (Acs) and ADP-forming acetate-CoA ligase (Acd), respectively, were identified in the ANME-2a genome. To further verify the metabolic capacity of ANME-2a to produce acetate, heterologous gene expression and activity assays on the two key enzymes Acd and Acs at the final step of acetate formation were performed. The purified enzyme showed catalytic activity for acetate formation. The affinity to acetyl-CoA was Km = 31.28 μM. The Acs purified in this study revealed a higher affinity for acetyl-CoA (Km = 8.5 μM) than for acetate (Km = 0.49 mM), which indicates a preference for acetate production in this case. The enzyme assays of Acd and Acs provide strong evidence to conclude that the conversion from acetyl-CoA to acetate is favorable for ANME-2a. 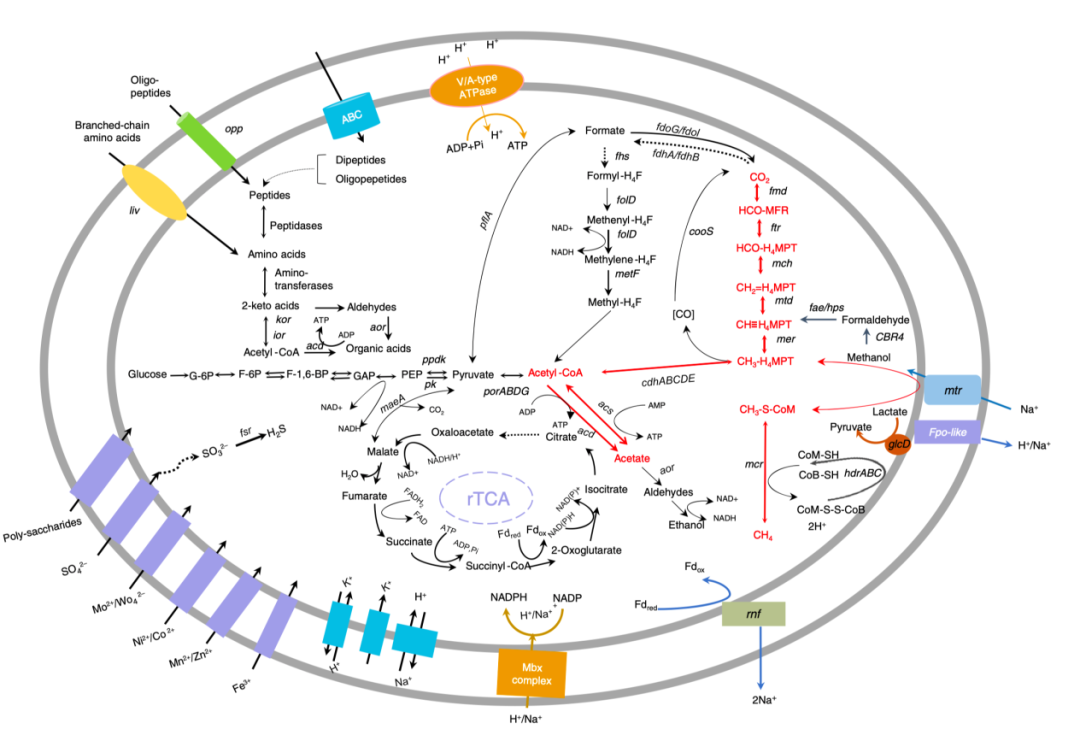 Wide distribution of the acd gene in cold seep archaea

To explore the distribution of archaeal acetogenesis in cold seep environments, a phylogenetic tree of acd genes from a total of 77 cold seep environments was constructed (Fig.2). Among all the ANME and methanogens, only ANME-2, Methanosarcinales, and Ca. Verstraetearchaeota contained acd genes. In particular, the ANME-2 from methane seepages and subseafloor sediment formed a separate cluster. Meanwhile, acd genes were identified in Archaeoglobi, Ca.Bathyarchaeota, Crenarchaeota, Thermococci, and Thermoplasmata (including MBG-D), indicating a wide distribution of acetate metabolism among cold seep archaea. 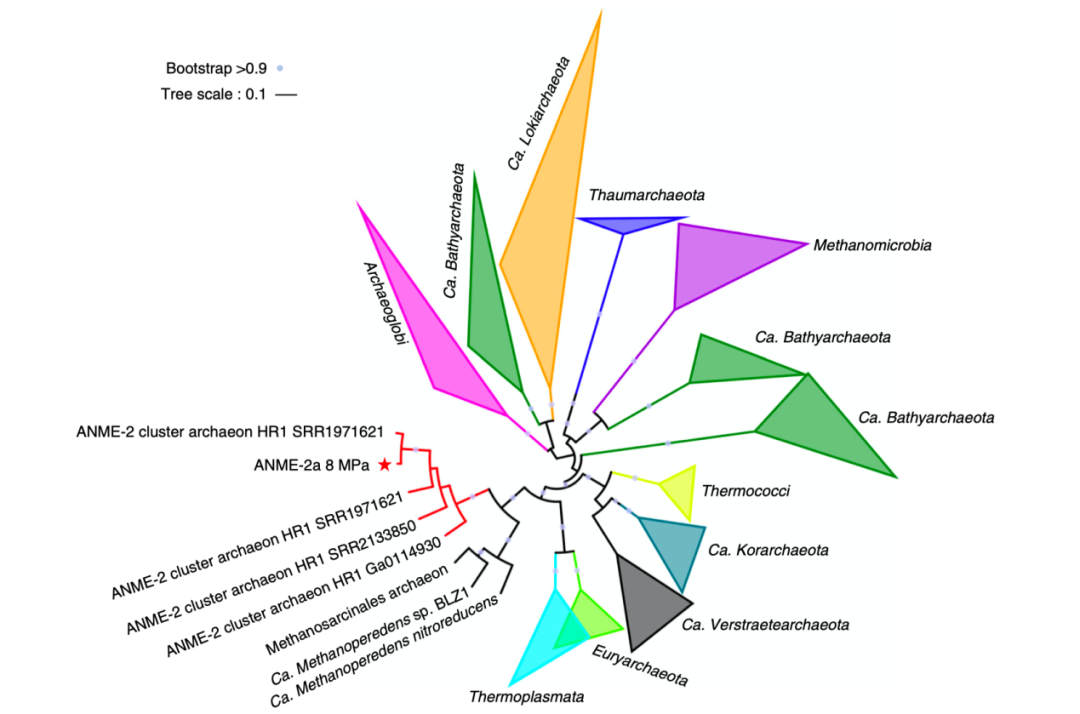 Fig. 2 Distribution of acd genes among archaea from cold seeps. A total of 113 acd genes are identiﬁed from 77 metagenomic datasets of cold seep samples. Acd gene from ANME-2a is marked as red asterisk.

Based on these results, the researchers propose a conceptual model of carbon cycling in cold seeps, where acetate release from AOM process is considered (Fig. 3). During the classic anaerobic oxidation of methane process, methane can be converted into organic carbon, such as acetate, which further fuels the heterotrophic community in the ecosystem. Assuming all the organic carbon originated from methane, and considering approximately 24μg methane-carbon consumption per day, 3-25% of the total consumed methane is converted to acetate or other organic compounds that have been previously neglected. The findings expand the metabolic repertoire of ANME-2a and increase understanding of the carbon cycle in cold seep ecosystems. 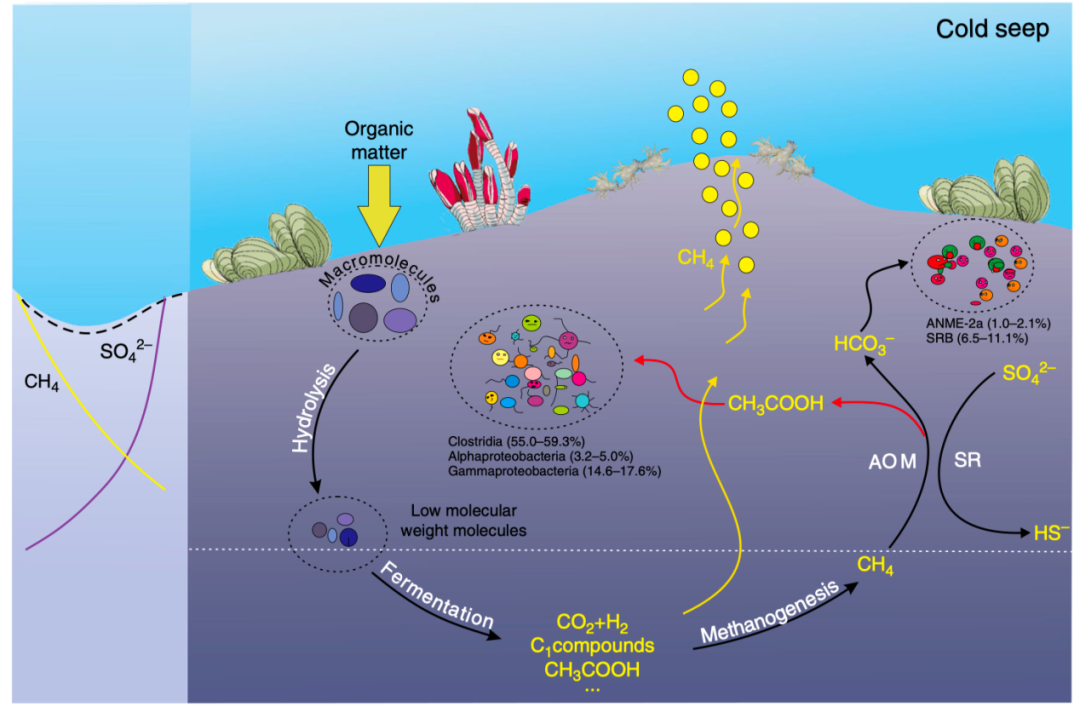