Piezophiles (‘pressure-loving’, previously known as barophiles), by the commonly accepted definition, grow faster under high hydrostatic pressure (HHP) than that under ambient pressure (0.1 MPa). In 1979, Yayanos and coworkers succeeded in isolating piezophilic microorganisms from amphipods recovered from a depth of 5782 m in the Philippine Trench, which was the first report on the isolation of a piezophilic microbe. Since then, many attempts have been made to isolate piezophilic microorganisms. However, only 78 piezophilic isolates have been reported to date. Although these piezophiles are almost all from deep-sea sediments, marine animals and hydrothermal vents, few strains are isolated from the shallow depth of the sea below 2000 m. Therefore, piezophiles are believed to exist only in pressurized environments where life has adapted to HHP during evolution. However, recent findings suggest that piezophiles have developed a common adaptation strategy to cope with multiple types of stresses including HHP. These results raise a question on the ecological niches of piezophiles: are piezophiles restricted to habitats with HHP?

In this study, we observed that the bacterial strains Sporosarcina psychrophila DSM 6497 and Lysinibacillus sphaericus LMG 22257, which were isolated from surface environments and then transferred under ambient pressure for half a century, possess moderately piezophilic characteristics with optimal growth pressures of 7 and 20 MPa, respectively. Their tolerance to HHP was further enhanced by MgCl2 supplementation under the highest tested pressure of 50 MPa. Transcriptomic analysis was performed to compare gene expression with and without MgCl2 supplementation under 50 MPa for S. psychrophila DSM 6497. Among 4390 genes or transcripts obtained, 915 differentially expressed genes (DEGs) were identified. These DEGs are primarily associated with the antioxidant defense system, intracellular compatible solute accumulation, and membrane lipid biosynthesis, which have been reported to be essential for cells to cope with HHP. These findings indicate no in situ pressure barrier for piezophile isolation, and cells may adopt a common adaptation strategy to cope with different stresses. 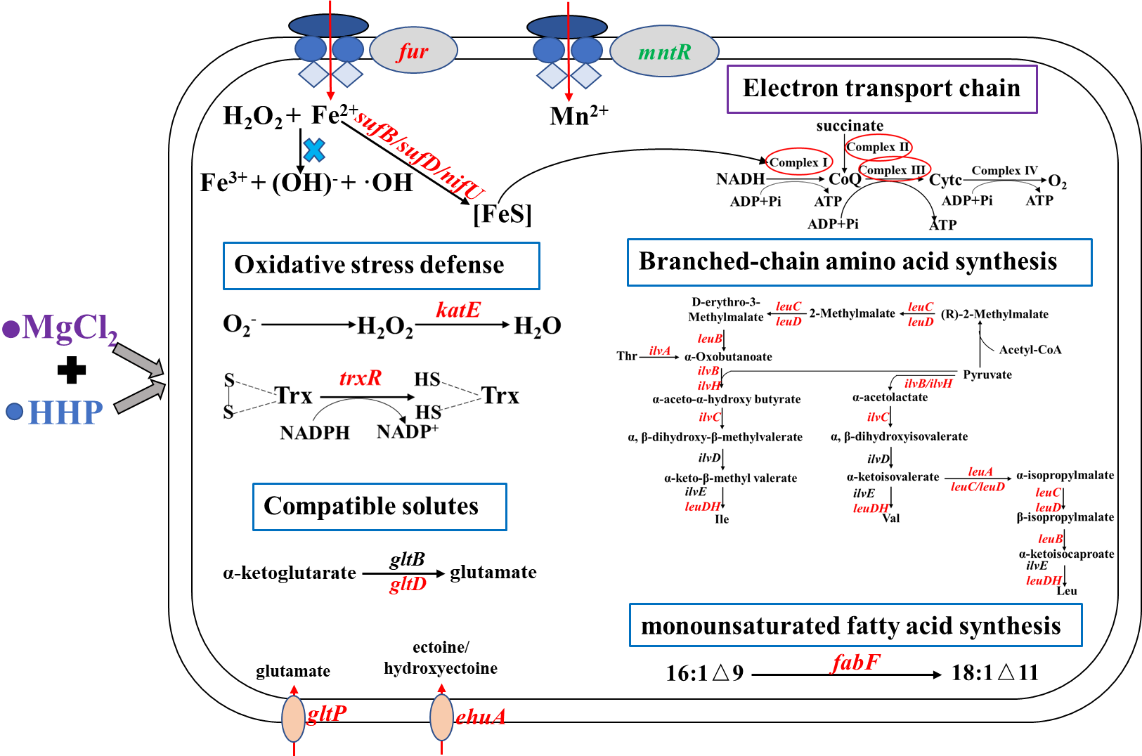 Fig. 1 Schematic diagram of DEGs for S. psychrophila DSM 6497 between the 50 MPa incubation samples with 0.25 M MgCl2 and the control samples without MgCl2. The upregulated genes are shown in red, and the downregulated genes are shown in green. The functions or pathways in the blue box represent the strategies of microorganisms in coping with the stresses of HHP and MgCl2, whereas those in the purple box represent the strategy of microbes under high concentrations of MgCl2.