On 03 March 2021, a paper titled " Towards enriching and isolation of uncultivated archaea from marine sediments using a refined combination of conventional microbial cultivation methods" was published online in Marine Life Science & Technology. This paper is co-first authored by Haining Hu and Vengadesh Perumal Natarajan, both from ICDLI. Fengping Wang is the correspondence author.

The archaea that can be readily cultivated in the laboratory are only a small fraction of the total diversity that exists in nature. Although molecular ecology methods, such as metagenomic sequencing, can provide valuable information independent of cell cultivation, it is only through cultivation-based experiments that they may be fully characterized, both for their physiological and ecological properties. However, archaeal cultivation in the laboratory has thus far proven challenging, particularly for those that reside in anoxic environments with low levels of nutrients, e.g., deep-sea sediments, partly because such organisms usually have long generation times. Traditional techniques such as dilution to extinction and streaking on defined media are often successful for the isolation of rapidly growing microorganisms, however, it becomes difficult for those with lower growth rates. Besides, a sudden transition from the low environmental substrate concentrations to high concentrations of standard microbial media would decrease the viability of oligotrophs, leading to incubation failure or induction of a viable but nonculturable state (VBNC). Therefore, it is necessary to establish enrichment cultures under defined conditions, thereby facilitating studies by culture-dependent microbiological techniques combined with culture-independent approaches.

In this study, the authors report their efforts towards enriching and isolation of uncultivated archaea from marine sediments using a refined combination of conventional microbial cultivation methods. These methods include cell extraction, size fractionation, enrichment, and a roll-bottle isolation technique, which enabled them to finally obtain three co-cultures consisting of Bathyarchaeota (subgroup-8) and a bacterial species.

Firstly, cells were retrieved from the sediment samples through a cell extraction procedure. This procedure concentrated cells as well as excluded in situ ambiguous compounds and particles. The following size fractionation step divided the sediment-free mixed cells into different size ranges of fractions by successive filtrations through 0.8 µm, 0.6 µm and 0.2 µm membranes. The step exerted strong effects in decreasing the archaeal diversity and enriching specific archaeal groups in different fractions (Fig. 1A). For each fraction, supplementation with a variety of defined substrates (e.g. methane, sulfate, and lignin) and stepwise dilutions led to highly active enrichment cultures of several archaeal groups with Bathyarchaeota most prominently enriched (Fig. 1B-D). Bathyarchaeota has been detected as one of the dominant archaeal groups in the sediments of the South China Sea, and is considered to be heterotrophic. A recent study found that lignin stimulated the growth of Bathy-8 subgroup and they assimilated CO2 autotrophically while utilized lignin as an energy source. The stimulation of the growth of Bathy-8 by lignin in this study is not surprising, but it is noteworthy that the sediment samples they used were from deep-sea sediments and the cultivation temperature was ~10 °C. Therefore, they anticipate that the Bathy-8 cells enriched here are a low-temperature-adapted group, in contrast to those isolated by the former study, which were from a coastal environment and were incubated at 30 °C. Nevertheless, although it seems likely that lignin-utilizing capability is a common trait in the Bathy-8 subgroup, further investigations are needed to understand the role of lignin in the growth of Bathyarchaeota and to clarify the mechanisms involved in the metabolism of lignin by Bathyarchaeota. 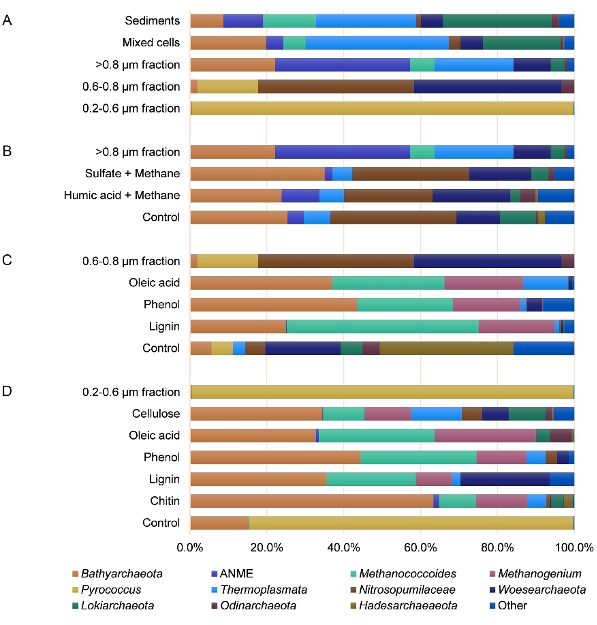 For archaeal isolation from the enrichment cultures, the authors developed a roll-bottle technique, based on the Hungate method for anaerobic incubation (Fig. 2). The self-prepared roll-bottles enable isolation methods, such as streaking/spreading on defined media, to be carried out in tightly sealed bottles, which provide a stable growing environment, strict anaerobic conditions, and little risk of bio-contamination from the surroundings. Finally, this technique enabled them to obtain three co-cultures consisting of Bathyarchaeota (subgroup-8) and a bacterial species affiliated with either Pseudomonas or Glutamicibacter. The results suggested the ability of the three co-cultures to utilize lignin or sulfate/methane for growth. However, whether there is syntrophic association between Bathyarchaeota and the bacterial members is still ambiguous and remains to be investigated. 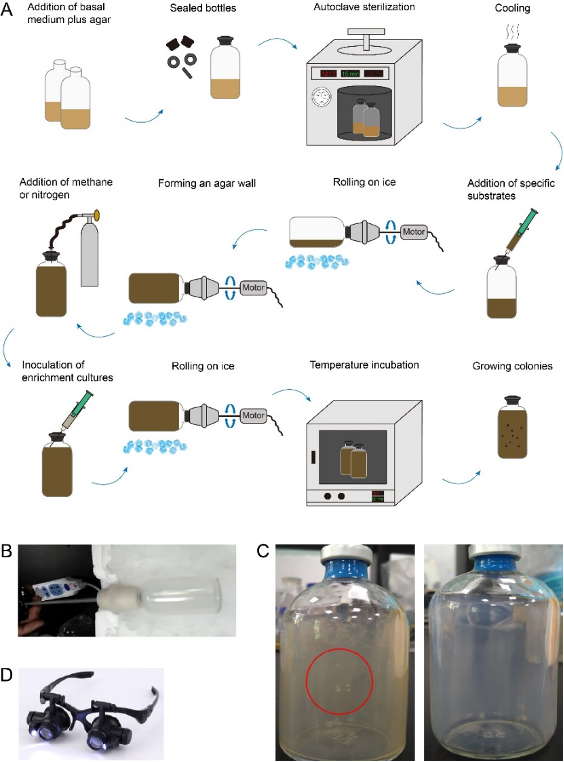 Their work demonstrated that cell extraction, size fractionation, enrichment, and isolation that are combined in a proper way could be useful and promising towards successful enrichment and isolation of numerous slowly growing archaeal groups from marine sediments.